There’s an old Sussex quirk, plenty of old Sussex quirks in fact, but there’s one that caught my attention as I flipped the pages of my Sussex Miscellany; Cuckoo Ale. It states that as soon as you hear the first call of the season from the tenacious cuckoo, you must go to the nearest inn and drink to its health. Any excuse to go for a pint…

Further research suggests that this old quirk of the past is something that folk practiced elsewhere in the country, as this excerpt from The Dictionary of English Folklore (By Jacqueline Simpson & Stephen Roud) shows: 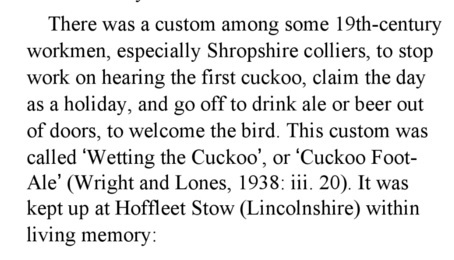 And this from the same source:

When I’m not uploading words and pictures about beer and brewing, I too am “out of doors”, a plant propagator by trade, with my ears tuned into the bird song that surrounds me. The first cuckoo call is an exciting moment and one that’s missed if it becomes clear, as the months go on and spring becomes summer, that the distinctive two-tone won’t be heralding the season.

The notion that this call was and probably still is (like I said, any excuse…) celebrated and honoured with a pint of ale (strong), is something I can easily get on board with. A quick internet search shows that a few Cuckoo Ale’s exist today, but it got me thinking about what I’d brew, if I could, in order to toast to the health of the harbinger of spring.

Something in the style of an Imperial or India Brown Ale perhaps? Something that on the face of it looks a bit ordinary, but deceptively packs a punch, a strong, bold and altogether bigger beer than a pint of standard brown ale. A bit like the deceptive, strong, bold bird that it’d toast.

Or is that all just a bit cuckoo?!